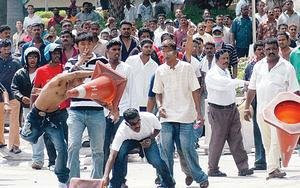 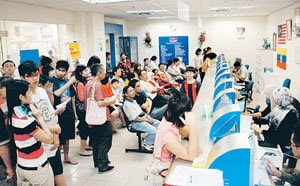 PETALING JAYA (June 15, 2008): About 300,000 vehicle owners have claimed more than RM144 million in fuel rebates from post offices nationwide over the weekend.

PMB had paid out RM116.734 million against 239,414 claims yesterday, the first day rebates were paid out since the government announced on June 4 a pay-out of fuel rebates of RM625 to owners of cars under 2,000cc and RM150 for owners of motorcyles under 250cc.

Unlike the first day, however, there were fewer vehicle owners thronging post offices to claim their rebates, perhaps due to lack of information as to which post offices were open to make the pay-outs.

Claimants who went to claim their rebate today were mostly shoppers at the post offices inside shopping complexes and hypermarkets.

PMB said the average processing time per claim was three minutes, but was longer for those who used temporary identity cards.

Outside post offices, touts were however having a field day selling fuel rebate claim forms to vehicle owners who were waiting in line.

When contacted by phone, PMB corporate communication head Datin Rohaiza Hashim confirmed that there were individuals who sold claim forms to vehicle owners.

"Some post offices in Penang have lodged a police report on this matter, and our security will be stepped up to ensure that this will not happen again," she said.

"The forms are available in the post offices and on our website for free, and claimants can seek help from our counter staff on how to fill them up," she said, adding that the forms will only be given out to claimants in person.

Asked why "touting" was still happening when the issue of the forms are controlled, Rohaiza said the unscrupulous individuals might have asked for five forms a time as a claimant is allowed to claim for up to five vehicles, and later sold the forms to other claimants.

She also clarified that post offices which usually open on Sundays will continue to process rebate claims on weekends, and not just for today.

Only vehicles owners who had renewed or paid their road tax in April and May are entiled to claim for the rebate now and those who renewed in June may start claiming in July.