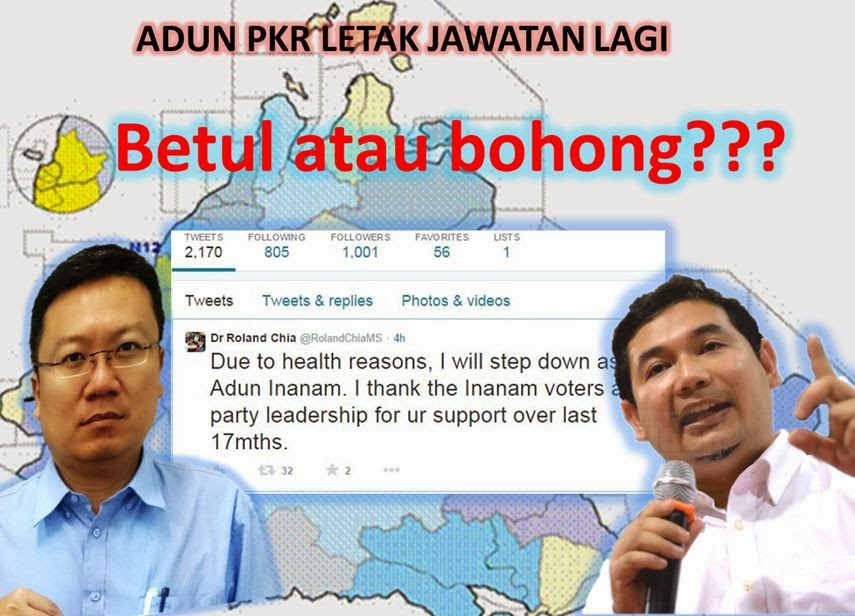 PKR Sabah Make Denials; But Is Roland’s “Stepping Down” For Real Or Is It Just “Wayang” 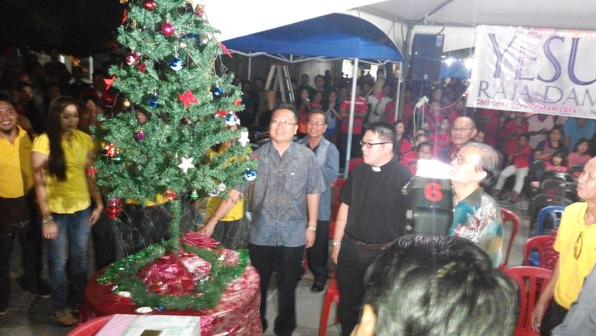 KOTA KINABALU: Denials have come in thick and fast and the rumour mill has gone into overtime following a mid-morning social-media posting by Inanam state assemblyman, Dr Roland Chia that he is stepping down.
The reason given by Chia for wanting to ‘throw in the towel’ after a mere 17 months as a state lawmaker, is that he has health problems which he did not elaborate in his facebook.
The PKR lawmaker said “due to health reasons, I will step down as Adun Inanam. I thank the Inanam voters and party leadership for ur (your) support over (the) last 17mths”.
He then remained incommunicado and PKR sources claimed that he was in Singapore undergoing treatment for an undisclosed ailment.
Sabah PKR Leadership Council chairman Datuk Seri Lajim Ukin late Wednesday dismissed the rumour in the social media that Chia, a dental surgeon by profession, had resigned from his seat.
“As of now, it is just a rumour. I checked with the Sabah legislative assembly speaker (Datuk Seri Salleh Tun Said) and was informed that there has been no resignation of any assemblyman,” he told Bernama.
When told that the announcement of the resignation was carried in Chia’s Facebook account, Lajim said it could be possible that the account was hacked.
Lajim said he and Chia had attended a meeting together last week but the Inanam assemblyman had not said anything about stepping down.
Sabahkini.com also contacted Salleh and the Speaker in an SMS reply wrote: “Haven’t received resignation letter yet”.
PKR’s Api-Api assemblyman, Christina Liew, said she was just as surprised when contacted.
“I am not sure as we have not received any received a resignation letter yet. I contacted the party’s HQ and they also have not heard. We are not sure if this is true or not,” she said, adding that she was unaware of any health problems.
Dr Chia is also Sabah PKR vice-chairman and a party supreme council member.
PKR secretary-general, Rafizi Ramli said the party is trying to get in touch with Chia, to enquire about his health status and he confirmed that the Assemblyman was out of the country.
“I have contacted several Keadilan Sabah leaders as well as officers of Chia and they have confirmed that Chia indeed has health problems, although they themselves do not know how serious it is,” said Rafizi in a statement to Sabahkini.com.
Chia was last seen in public on Sunday when he attended the Christmas programme organised by several churches of different denominations at the Inanam Memorial.
His Facebook posting attracted a few comments. One Sanny Ho remarked “so sad to hear that…. . Thank you for serving us”
Another, Johnny Siow, remarked: “hope u no using a health reason for lompat (jump) party. To which Sany replied: “If he want to lompat why should he resigned as ADUN?”
Timadang Tarap Sabah in his posting said he sympathised with Chia situation and prayed that the politician would get well soon.
But he criticised Chia’s Facebook posting on his intended resignation. “His (announcement in social media) action lacks professionalism,” wrote Timadang.
But some of Chia’s party colleagues were rather critical of the Inanam rep, charging that he was not well liked within PKR Sabah.
One of them commented: “Knowing Chia well, it would not come as a surprise if he were to switch camps and that all this overseas treatment thing is nothing but a show”.
He quickly added that he offers his sympathies if Chia was indeed sick as claimed, though he said that when a group of PKR leaders including himself met Chia last week for party matters, Chia did not indicate anything amiss at all.
“So this comes very much as a surprise to me. I hope it is all just a misunderstanding and that Chia will come out soon to clear the air. The Inanam supporters and voters deserve better than just a Facebook announcement,” he added.