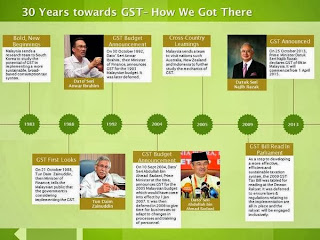 Update: A GST of 6% was announced, with the abolishment of Sales Tax and Service Tax effective 1 April 2015.

Read our guide below to find out all about the GST, get the full low down on why it’s being introduced, and what it means for you!

Wait, don’t we already have GST in Malaysia? I’ve seen it in some receipts…

Confusingly, there are 2 other indirect taxes already present in the Malaysian tax system. One of them is the Sales Tax (as per the Sales Tax Act 1972), and the other is the Service Tax (under the Service Tax Act 1975). Combined, they are usually referred to as the SST.
The Service Tax part  is the one that is sometimes confusingly referred to as the Government Service Tax (or “GST”) but it is not the usual use of the GST acronym worldwide, Goods and Services Tax.
Note that the Sales Tax and Service Tax are not to be confused with a “Service Charge” of 10% typically present in the hospitality industry (hotels, large restaurants etc.). This charge is not a tax, and the restaurant typically keeps the 10% (and maybe shares some of it with their staff).

The Sales Tax of 10% is collected from all manufacturers or importers who have yearly revenue of RM100,000 and above. Licensed manufacturers are to charge 10% sales tax on sales value of their manufactured products and to collect the tax from their customers, and remit to Customs every 2 months.
There are a number of items which have a special Sales Tax rate of 5%, and the following manufacturing and import activities are exempted from sales tax (ie. 0%):

Previously 5%, raised to 6% in January 2011, the Service Tax applies to certain items in the service industry including food and drink outlets and tobacco. The tax also applies to professional and consultancy services provided by the professional firms or persons such as accountants, lawyers, engineers, architect, insurance companies, etc. and is also remitted to Customs authorities every 2 months.
This 6% Service Tax is the thing that is frequently called GST (Government Service Tax) although in international convention, GST normally stands for Goods and Services Tax.
Adding to the confusion is the recent introduction of a RM50 / year Service Tax for principal credit card holders (per credit card) and RM25 / year for supplementary credit card holders, both falling under this Service Tax nomenclature.

What is the Goods and Services Tax (GST)?

Known across the world as either GST or VAT (value added tax), it is a broad-based consumption tax (tax on your spending!) which affects all parties in a multi-stage taxation system across the value chain from manufacturing to sales, it is based on a tax-on-value-add concept which avoids duplication of taxes. This is in contrast to both the Sales and Service Tax in Malaysia which is just added at one stage (Sales Tax at manufacturer level, and Service Tax at consumer level).
The Goods and Services Tax in Malaysia (GST) was initially mooted by the federal government in 2011 to replace the existing Sales and Service Taxes, but was met with much resistance from the public at large, partially due to the implication of a price hike in essential goods and services, but also partially due to the lack of clarity around the current consumption tax systems in Malaysia.

How does GST work in Malaysia?

Why replace Sales Tax and Service Tax (SST) with GST?

The government’s intention has always been to replace the sales and service tax regime with GST and to do so at a GST rate that is revenue-neutral. This means that (when it gets introduced anyway) they don’t expect to collect any more or less taxes than they did before. Why would they bother then?
Well, the GST unit of the Royal Malaysian Customs Department gives us the following reason ‘method of collecting taxes which works better than others’ to explain the need for GST. Economists, meanwhile, believe the government has very rightly approached the GST as a new source of income with a broad tax base as a means to begin to diversify tax revenue sources.

So if the 10% Sales Tax and 6% Service Tax is abolished, does this mean GST will be introduced at a rate of 16% to make this a revenue-neutral exercise?

It might seem like simple arithmetic, but as mentioned before, not all items are subject to 10% Sales Taxes (some 5% and some 0%), and likewise with the 6% Service Tax (and rarely are 2 items subject to both Sales and Service Tax, as one targets the manufacturing and import industry, and the other the service industry). As such, a 16% GST rate (with no exemptions) will definitely result in higher prices across the board!
As a result of this, to make the introduction of GST a revenue-neutral exercise for the federal government, an initial rate of 4-7% had been proposed, with some essential items given a zero-rate mooted as well.
The final rate that was announced on 25 October 2013 was 6% GST, with the following items 0% rated (and thus exempt):
- Essential items such as: Rice, sugar, salt, flour, cooking oil among others
- Public transport (LRT, KTM, Buses)
- Sale and Rental of property

How will the implementation of GST affect me?

As mentioned, the replacement of Sales and Service Tax with GST is intended to be revenue-neutral to the government’s coffers, so in theory, to consumers this may represent a minimal effect to the aggregate prices of everyday goods and services. Lets look at 3 scenarios to see what it means for prices, (1) for items charged with Service Tax, (2) for items charged with Sales Tax, and (3) for items with no Service or Sales Taxes:

However, the obvious concern here is to make sure that businesses do not take advantage of just the fact that GST has been introduced as a reason to raise prices of goods and services indiscriminately. To this end, the Anti-Profiteering Act has been tabled to enable enforcement against such practices. In theory though, the multi-stage tax nature of the GST should allow the Customs department to aggregate pricing information far more accurately than they do currently, the implied monitoring of this should serve as a deterrent to unscrupulous businesses (will wait and see how things pan out!).

How does the GST affect SMEs in Malaysia?

As the total GST amount is paid for by customers (parts of it effectively paid across the value chain, through GST input credits etc.), businesses are not affected directly by price increases due to GST.
The added cost through the implementation of GST will be due to administration of GST input credits and accounting for GST. Because of this, businesses with an annual turnover of less than RM500,000 are exempted from being GST registered and will thus not be required to collect or pay GST. 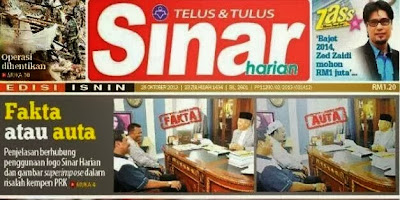