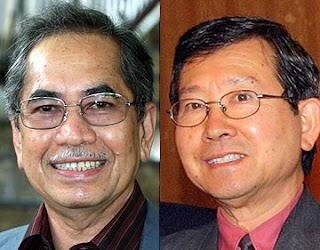 Penang acting chief police officer Salleh Mat Rasid said although a police report on the threat was lodged by Karpal in Penang, the case was being referred to Johor police because the alleged threat was made in the state.

Want to win votes in a Muslim country in Asia? Keep your Islamic agenda hidden. This is the lesson taught by recent elections in Malaysia and Pakistan, among other Islamic nations.

In the Malaysian parliamentary election last month, the group known as PAS (Parti Islam se-Malaysia) increased the number of its seats from six to 23 while the governing National Front, led by Prime Minister Abdullah Badawi suffered its heaviest defeat since 1969.

There were many reasons for this. However, the most important might have been Mr. Badawi’s decision to play the Islamic card while PAS leader Abdul Hadi Awang
went in the opposite direction. Waving the pan-Islamist flag, Mr. Badawi promised to draw Malaysia closer to an ill-defined Muslim world.

By contrast, Mr. Awang opened his campaign by abandoning the principal plank of PAS’s ideology: the demand for an Islamic state. “We are not calling for an Islamic state,” he said. “All we want is clean government and social justice." Mr. Awang also dropped his party’s plan to force women to wear the hijab and agreed to allow some women, and some non-Muslims, to become candidates on his party’s slate.

To many Western commentators, the February general election in Pakistan had been a defeat for President Pervez Musharraf. The real losers, however, were the Islamists. Parties linked to the Taliban and al Qaeda saw their share of the votes slashed to about 3% from almost 11% in the previous general election. The largest coalition of the Islamist parties, the United Assembly for Action (MMA), lost control of the Northwest Frontier Province—the only one of Pakistan’s four provinces it governed. The winner in the province was the secularist National Awami Party (NAP).

In the Middle East and Arab nations Islamists don’t fair much better.

In Iran’s general election last month, candidates who toned down their Islamic rhetoric generally did better than those who clung to old slogans of religious fanaticism. Even then, only 46% of those eligible actually voted. In most cities, turnout was below 30%; in Tehran it was just 19%. Because only government-approved candidates were allowed, there wasn’t much of a choice. Nevertheless, wherever possible voters picked those least identified with Islamism.

In last November’s general election in Jordan, the Islamic Action Front suffered a rout, with its share of the votes falling to 5% from almost 15% in elections four years ago. The group, linked with the Islamic Brotherhood, kept only six of its 17 seats in the National Assembly. Its independent allies won no seats.

In Gaza and the West Bank, Hamas—the Palestinian branch of the Muslim Brotherhood—won the 2006 general election with 44% of the votes, far short of the “crushing wave of support” it had promised.

In Turkey, the Justice and Development Party (AKP) has won two successive general elections, the latest in July 2007, with 44% of the popular vote. Even then, AKP leaders go out of their way to insist that the party "has nothing to do with religion.”

The AKP’s success in Turkey inspired Moroccan Islamists to create a similar outfit called Party of Justice and Development (PDJ). The PDJ sought support from AKP “experts” in last September’s general election in Morocco. Yet when the votes were counted, the PDJ collected 10% of the popular vote, winning 46 of the 325 seats.

Islamists have done no better in Algeria. In the general election, held in May 2007, the two Islamist parties, Movement for a Peaceful Society and Algerian Awakening, won less than 12% of the popular vote.

In Yemen, one of the Arab states where the culture of democracy has struck the deepest roots, elections in the past 20 years have shown support for Islamists to stand at around 25%. In the last general election in 2003, the Yemeni Congregation for Reform won 22%.

Kuwait is another Arab country where the holding of reasonably fair elections has become part of the national culture. In the general election in 2006, a well-funded and sophisticated Islamist bloc collected 27% of the votes and won 17 of the 50 seats in the National Assembly. In the general election expected within the next weeks, Islamists are expected to do worse.

In Lebanon’s last general election in 2005, the two Islamist parties, Hezbollah (Party of God) and Amal (Hope) collected 21% of the popular vote and 28 of the 128 seats in the parliament.

Why do Islamists fail to do better in elections in Muslim countries? There are many answers. The one I prefer comes from Turkish President Abdullah Gùl: “Most Muslims like to live in an Islamic society with a secular state.”

The Islamist parties also use a lot of social help for the poor to buy votes. They have no program and rely on bribes and violence. The West evrestimates the Islamists, helping inflate their egos. J Cameron

PAS of Malaysia. which call themselves the champion of islam in Malaysia. First. one should asked do they really practise Islam or mere rhetoric. Externally, they are akin to Islam,but in substance they are just riding on the islamist banner to win elections,to gain power and no more. More often they are holier than thou,and in many
instances PAS does not practice what they preached. calling muslim who does not suport PAS as infidels, and a sure ticket to paradise for those who voted for PAS in elections. While it is not uncommon for PAS leaders to spread outright lies, rumours, make believe, been cleverly blended in their so called islamic religous lectures in mosques and suraus. THe make believe are so often repeated,that many have
swallowed them as divine facts. Foul and abusive gestures are much tolerated lest a divine allowance to describe political opponents.

Sublimal, segregation of muslim in malaysia, when PAS followersperformed their daily and fridays prayer in their party operated mosque and suraus,discouraged to perform prayers at the village or distric mosque, as the imams are goverment elected,thus they are infidels ,and animals slaugtered by these imams are haram. PAS operate
their own kindergargen and schools,segregation of this kind is very rampant lately. Division of sunni muslim in malaysia has started. A classic PAS kind of Islamic interpretation which clearly contravened with Islam .

pada 4/23/2008 02:19:00 PTG Posted by Aspirasi 0 Komen!!!
HANOI, April 23 (Bernama) -- Vietnam is considering the possibility of placing a temporary ban on North-South transport of pigs and on pig trade via border gates with foreign countries, in a move to prevent the spread of Porcine Reproductive and Respiratory Syndrome (PRRS), or known as "blue ear" disease.

On April 22, over 7,100 pigs in Vietnam's central and northern regions were found being infected with PRRS.

PRRS was first recognized in the United States in the mid-1980s and is now present in most pig producing countries. The symptoms include reproductive failure, pneumonia and increased susceptibility to secondary bacterial infection.

In another fissure to the tenuous Pakatan Rakyat coalition, DAP leader Karpal Singh has called on PAS to ditch its Islamic state policy from the party’s platform.