Yesterday evening, I was informed of the terrible and deeply shocking news that a Malaysia Airlines jet went down in eastern Ukraine.

The flight departed Amsterdam at 12.15pm, local time. It was scheduled to arrive in Kuala Lumpur at 6.10 am, local, Malaysian time.

The aircraft’s flight route was declared safe by the International Civil Aviation Organisation.

And International Air Transportation Association has stated that the airspace the aircraft was traversing was not subject to restrictions.

Malaysia Airlines has confirmed that the aircraft did not make a distress call.

The Government of Malaysia is dispatching a special flight to Kiev, carrying a Special Malaysia Disaster Assistance and Rescue Team, as well as a medical team.

According to information provided by Kiev Air Traffic Control, the location of the plane’s emergency locator beacon is 48 degrees 7 minutes and 23 seconds North; and 38 degrees 31 minutes and 33 seconds East.

The Ukrainian authorities believe that the plane was shot down.

At this early stage, however, Malaysia is unable to verify the cause of this tragedy.

But we must – and we will – find out precisely what happened to this flight.

No stone can be left unturned.

If it transpires that the plane was indeed shot down, we insist that the perpetrators must swiftly be brought to justice.

Emergency operations centres have been established. In the last few hours, Malaysian officials have been in constant contact with their counterparts in Ukraine and elsewhere.
And I will be speaking to a number of world leaders over the coming hours.

I have had several conversations with the Prime Minister of the Netherlands.

I have also spoken to the President of Ukraine. He has pledged that there will be a full, thorough and independent investigation, and Malaysian officials will be invited to take part.

The Ukrainian president also confirmed that his government will negotiate with rebels in the east of the country, in order to establish a humanitarian corridor to the crash site.
Just now, I received a call from President Obama.

He and I both agreed that the investigation must not be hindered in anyway.

An international team must have full access to the crash site.
And no one should interfere with the area, or move any debris, including the black box.

This is a tragic day, in what has already been a tragic year, for Malaysia.

As we work to understand what happened, our thoughts and prayers are with the family and friends of those onboard the flight.

I cannot imagine what they must be going through at this painful time.

The flight’s passengers and crew came from many different countries.

But today, regardless of nationality, we are all united in grief. 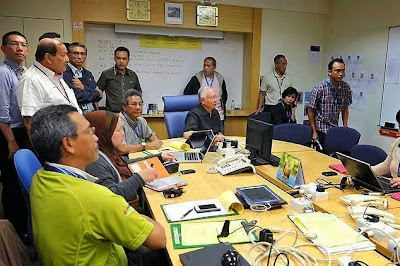 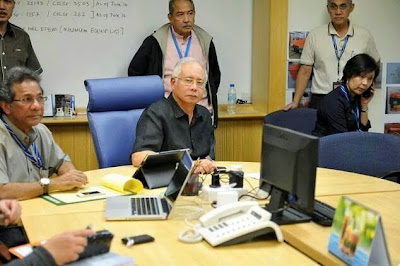