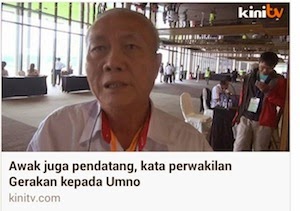 (The Star) – Gerakan has suspended Johor delegate Tan Lai Soon over his speech that implied that Indians, Chinese and Malays are “pendatang” or immigrants.
The party’s central working committee, after an emergency meeting on Monday that was called in response to complaints by 14 party members, decided that Tan would be suspended and has been issued a show cause letter.
At Gerakan’s 43rd National Delegates Conference on Sunday, Tan chastised Umno members for calling Chinese and Indians “pendatang” and said that Malays were no different as they came from Indonesia.
Tan said only the Orang Asli and natives in Sabah and Sarawak could be considered the original inhabitants of the land.
Gerakan deputy president Datuk Dr Cheah Soon Hai told reporters on Monday that the party condemned the remarks made by Tan.
“It is not the party’s stand, we are all Malaysians and no Malaysian is a “pendatang” or an immigrant.
“All Malaysians that are born here are Malaysians. I think that if a Malay called a Chinese “pendatang” it will hurt and vice versa,” Cheah said.
“We have taken note that Tan has retracted his remarks and apologised for it,” said Cheah.
Tan will be given 14 days to respond to the show cause letter on why he should not be expelled from the party in accordance with Article 17.2 of the party’s constitution.
Cheah apologised to all Malaysians who have been hurt by Tan’s remarks.
“We reiterate once again that Gerakan is a party of all races and we do not condone any remark that is un-Malaysian,” he said.
“We call on all parties to cease making any accusation that will further aggravate the situation. Gerakan has always uphold and will continue to uphold the Federal Constitution and Rukunegara,” he said.